The Cancun Effect
(Or Is It the Cocoon Effect?),
or, “Travel Psychology 105 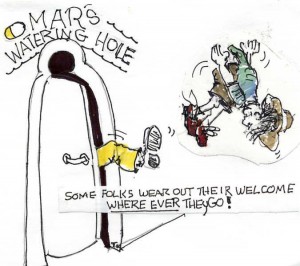 “Why might American tourists, afraid to go to some countries, have no fear in going to others, even though the countries might be identical regarding danger, terrorism, and so on.

“Morocco may very well be one of these countries, currently considered to be an attractive travel destination, with new boutique hotels and resorts springing up all over. Yet Morocco is virtually identical to Jordan, which Americans think of as a dangerous country. Both have good tourist sites, both are governed by young, pro-Western kings, both allow Americans to visit with no visas, and both have had a very major terrorist incident in the past couple of years.

“What is it in the psychology of travel that makes one dangerous and one attractive? Can you think of other examples of this sort? Perhaps like Americans avoiding Colombia because of crime, but not thinking of Mexico, which has terrible crime problems, just as dangerous? Why psychologically do Americans not weigh real dangers, like malaria, highway safety and the like, but relate more to the image a country projects. And where does that image come from?

I suggest that an understanding of the reasons behind these complex and seemingly paradoxical behaviors of tourists in regard to their selections of travel destinations to potentially dangerous countries might be gained by looking at a number of factors, namely, danger, type of traveler, confidence level, and travel marketing. All-in-all, The Cancun Effect might be one way of describing this burgeoning travel phenomenon of travel to safe-dangerous places!

“One Persons Sense of Excitement is Anothers White Knuckle Experience

Excitement and Adventure: By and large we seek out the romantic; we seek excitement and we seek adventure. But what, really, is excitement? Adventure? To consider what excitement and adventure truly are, we need to consider that, for the most part, people are quite fearful of the unknown, wary of what is different, afraid of change, prone to culture shock. Is there a paradox here?

Interestingly, adventurous, romantic and exciting travel, is, to some extent, precisely so BECAUSE OF the element of discomfort, insecurity and potential danger. We seek romance, excitement and adventure TO A POINT just to the point of ‘danger,’ so-to-speak . I use the word ‘danger’ in the sense as anything that tends to tip the balance of comfort, security, safety in the direction of discomfort, insecurity and risk, both psychological and otherwise . . . Of course, one person’s sense of adventure is another’s greatest phobia or fear. Riding the Zambezi River rapids is one person’s thrill and another’s white-knuckle near-death experience.

The balance between romance / adventure / excitement and culture shock / fear / discomfort is a fine line. I think travelers try to maximize their own sense of excitement and adventure by stretching the envelope, i.e., by experiencing all that they can experience, just short of where their fear factors lie. Excitement and adventure–balanced against the fear of the unknown–is probably the fundamental travel dynamic. Excitement may be defined, then, as coming as close to danger / discomfort / insecurity without actually being in danger

And for many, the sole travel experience is NOT venturing outside the envelope, while at the same time having at least a sense of the adventure of it all!

Perceived self-confidence of travelers seems to be a function of the level of travel experience they have, which may or may not reflect the conditions of reality. That is, tourists have the least level of confidence in regard to venturing out on their own. Travelers are more confident, adventurers even more so, whereas danger junkies may have an exaggerated sense of their own capabilities. Conditions of actual danger to travelers is partly a function of the country and partly a function of their own perceptions of the travel reality. Thus insulated tourists probably have the least knowledge of their travel environments, travelers and adventurers have a better sense of their realities, and danger junkies probably have a misguided sense of the actual dangers.

The marketing of travel destinations, at the direct behest, influence and control of local business interests, often bears little or no relationship to actual inherent dangers to travelers. Thus, the hospitality industry tends to downplay dangers, while, at the same time, emphasizing the appealing factors of the destinations.

The Cancun Effect — (Pulling this all together!)

When you consider the concept of danger, the type of travel, the confidence-level of the traveler, and the visitor industry together, it is no wonder that there is nearly a perfect match between what is offered by the particular tourist destination and the type of traveler attracted to it! And this sense equilibrium often bears little or no resemblance to the actual reality of danger to the visitor.

For example, most savvy travelers are acutely aware of the paradox of travel in Mexico. Although the majority of visitors to Mexico rarely directly experience problems, many of us have heard horror stories of what does occasionally happen to visitors to Mexico, from minor health inconveniences due to ‘the water’ to abductions, muggings and disappearances.

The magical appeal of the brochures depicting the wonderful weather, beaches, food and culture of Mexico often lull the unwary into a somewhat false sense of security. The tourist enclaves of high-rise hotels, apparently isolate tourists from all but the most superficial exposure to Mexican culture, while maximizing the brochure-appeal of the destination.

Thus, tourists from America feel somewhat confident that they will remain fairly secure within their culture-cocoons without having to venture too far outside their comfort zones. They will have, of course, the rudimentary exposure to Mexico, leaving them with the feeling that they have had some experience with Mexico.

And the more they pay, the greater will be their sense of security. This thought is not lost on the travel marketers who capitalize on maintaining some balance of perceived security and exposure to the culture whether or not grounded in reality.

When it comes to Morocco and Jordan, of course, the perceptions of many Americans is that Jordan is more-or-less in the heart of the middle east, being surrounded by Iraq, Syria, Egypt, Palestine and Israel, where there are almost daily occurrences of civil unrest and disturbance. Morocco, on the other hand is not really perceived as quite being in the thick of it. And the more expensive and exotic the destinations and hotels-rightly or wrongly-the more secure (and insulated) the tourists will feel.

This is the Cancun Effect, or perhaps, the Cocoon Effect: Isolate and expose . In a gentle balance that feels safe and yet that feels as if it is in a place. Afterall, isn’t it better to have a room with a view of the Medina in Marrakech than to actually stand right in front of men handling the deadly poisonous cobras!! (an exaggeration, but with a point to be made!).

Thus, the average tourist has probably very little knowledge, awareness and experience of the true dangers that await unawares out in the real marketplaces away from the perceived secure hotel-enclaves well inside their cocoons and envelopes.

The more expensive and prettier and exotic the brochures, the more tourists are self-deluded into thinking these places are actually safe. The more they expect to have to venture out of their envelopes, the more fearsome the expectation.

The beautiful packages, appropriately designed and highly priced provide the perfect lure to the destination, be it Morocco, Mexico or even Colombia.

* Dr. Michael Brein is The Travel Psychologist living on Bainbridge Island, Washington. He is an avid world-traveler as well as author, publisher and lecturer on a variety of travel subjects. His travel guide series, “Michael Breins Travel Guides to Sightseeing by Public Transportation may be viewed atwww.michaelbrein.com. Michael Brein may be reached at michaelbrein@gmail.com or 206.618.7618.